When it comes to kitchen knives there are two countries that dominate, Germany and Japan.

Although both have a rich history of knife making, they also have very different traditions and a different focus of what the most important features of a quality knife are.

In the knife world, you’ll always find the argument of which is better, German or Japanese knives.

In this article I’m going to delve into what are the traditional differences between Japanese and German knives.

More importantly, I’ll tell you what that means for you, and which knife style is most likely to fit your needs.

Japanese knives generally use high carbon steel, which allows them to have a finer, sharper edge for more precise cuts. German knives are built for durability, they are lower in carbon but are less likely to be damaged and are highly resistant to rust.

One of the major differences between German and Japanese knives is the steel they use.

Both countries are terrific steel manufacturers. Whilst Japanese steel production dates back centuries, to the creation of razor-sharp Samurai swords, German steel has always been more about industry and durability.

This is reflected in the steel used for their respective knives.

Japanese knives have historically focused on hardness. The harder a steel can be the finer the edge can be sharpened to and thus the sharper the blade will be.

That’s achieved by using steel with a high Carbon content, the risk though is as the hardness increases the steel actually becomes more brittle and prone to chipping.

German steel has a much larger focus on durability. Carbon content tends to be relatively low in German steels, at least by Japanese comparisons.

However; other elements that improve durability, such as Chromium, are typically much higher. Chromium is the element in steel that creates stainless steel and prevents the blade from rusting.

X50CrMoV15 is a german steel often used by some of the big German knife producers such as Wüsthof. The 15 in the name stands for 15% Chromium, making it a high-quality stainless steel.

The carbon content of X50CrMoV15 is only 0.55%, that’s about half of many Japanese steels, but as a result, the blade has flex, it’s unlikely to chip or crack and is ideal for busy commercial kitchens.

The result of all this technically can be summarized quite simply;

One of the main differences between Japanese and German knives is the range and style of designs.

Japanese knives have a huge range of designs, each knife designed for a specific task. In fact, some of the more popular Japanese knives you might know, such as the Santoku and Gyuto, are very recent creations made to mimic the ‘all-rounder’ type knives in western cooking.

That can make things pretty confusing for beginners. Knives like a Nakiri might look like meat cleavers to the western cook but they are actually specialized blades for cutting vegetables.

If you’re just getting into Japanese knives then the main two to know are the ones I’ve mentioned above, the Santoku and Gyuto. Since they are ‘all-rounder’ knives, similar to a Western Chef’s Knife, they can handle 90% of food prep jobs so they are ideal for a starter Japanese knife.

You’ll also notice that Japanese knives tend to have little to no curve on the blade cutting edge. Many western knives have a distinct curve to allow for quick rock chopping, Japanese food preparation has more focus on precision, and since the blades are sharper they tend to use an up-down motion rather than a rocking motion.

Are Japanese or German knives sharper

Creating a sharp blade has historically been the main focus of Japanese knife makers. This is achieved by using steel with a high Carbon content and this trend continues into modern-day Japanese knives.

A higher Carbon content makes the steel harder, allowing it to be sharpened to a finer edge without bending out of shape.

The risk of a very high Carbon blade is that as steel becomes harder it also becomes more brittle, so the risk of chips in the blade can increase, especially if they hit something hard like bone or the stone of a fruit.

However, as technology has developed many Japanese knife makers have been able to produce high Carbon blades that still maintain a very good level of durability.

Japanese knives like the Shun Classic 8 inch are becoming increasingly popular due to their balance between high Carbon content and great durability.

As a general rule, Japanese knives do rust more easily than German knives, although this difference is decreasing.

As a result, pretty much any quality German knife will be made from a good stainless steel.

Japanese knives do have much more of a focus on being rust-resistant than they used to, largely in a response to western preferences.

The Shun Classic 8 inch I’ve mentioned above is again a great example of this. Its Chromium content is 16%, making it more rust resistant than the Wüsthof Classic 8 inch which is 15%.

However; there still remain plenty of Japanese knives that have little or no rust protection. Such as the fantastic Yoshihiro 8.25 inch high Carbon Gyuto, which has a Chromium content of just 0.5%, but an incredible 1.35% Carbon content, for a super sharp edge.

In the modern-day, you really need to check the steel composition of the knife you’re buying. If the Chromium content is above 13% then it can be regarded as good stainless steel. Some traditionally designed Japanese knives will rust easily, but it’s becoming less and less common.

As a general rule;

Of course, there are so many different manufacturers that this simplified description won’t always be the case, but as a general rule, it’s often true.

German knives are made to be a workhorse knife. That’s why if I’m asked which knife is best for a professional chef I’d usually say a Wüsthof Classic 8 inch, because it’s durable and reliable and has been designed specifically to withstand all the physical, heat, and moisture pressure of a commercial kitchen.

Japanese knives are made for precision, they usually have a higher Carbon content than German knives and thus can withstand a sharper edge.

The negative to that is they require more care. Higher Carbon knives are prone to chipping more easily, so you should generally avoid using them to cut meat containing bones or fruit containing hard stones.

There is no correct answer to whether Japanese or German knives are better because ultimately it’s down to your personal requirements.

Kitchen knife enthusiasts usually like to have some Japanese knives because they are so amazingly sharp, and often quite beautiful.

But if you’re just looking for an all-purpose knife in a family kitchen, I’d recommend choosing a German knife.

Wüsthof is a German company dating back over 200 years. They focus on classically designed kitchen knives and are a favorite amongst professional chefs.

This is a knife that will last decades, I don’t think anyone could be disappointed with it.

If you happen to be on a bit of a budget then I’ve also written a detailed article on the best value Chef’s knives (opens new tab), where most of them use the same X50CrMoV15 German steel.

For a great Japanese knife that suits western requirements of durability, the Shun Classic is a great choice.

Its Japanese VG-MAX steel has a whopping 16% Chromium and 1.2% Carbon content, making it both super sharp and very resistant to rust.

It’s a quality knife, but if you’re looking for something more traditional then I’d highly recommend checking out my article listing the best Japanese carbon steel knives (opens new tab).

The Shun is listed there but so are some other more traditional knives such as the Yoshihiro. It’s a really great list for anyone trying to find a quality Japanese knife. 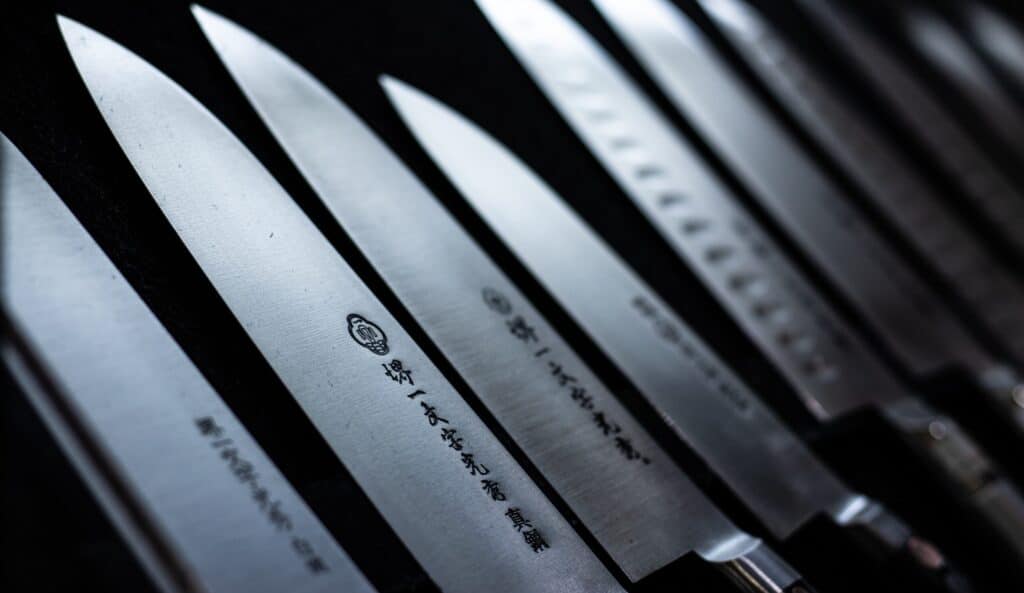 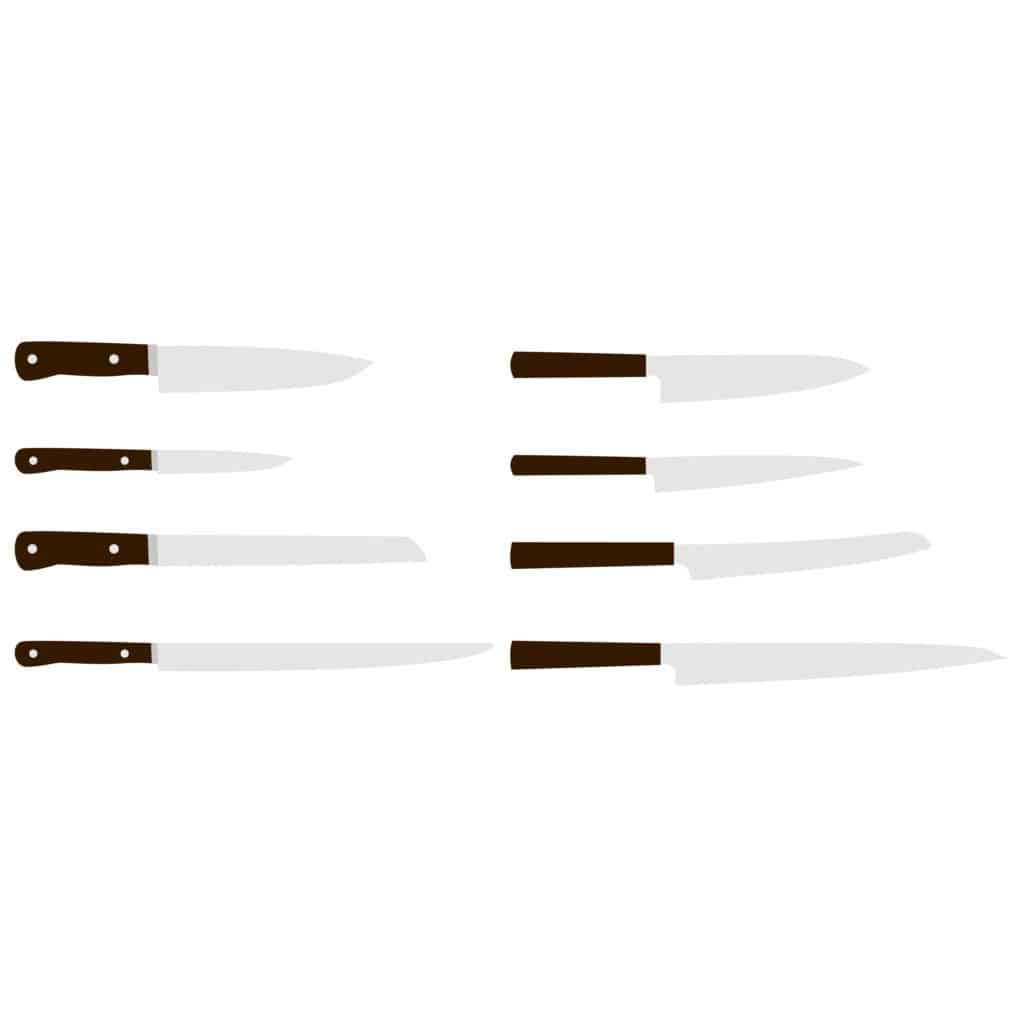 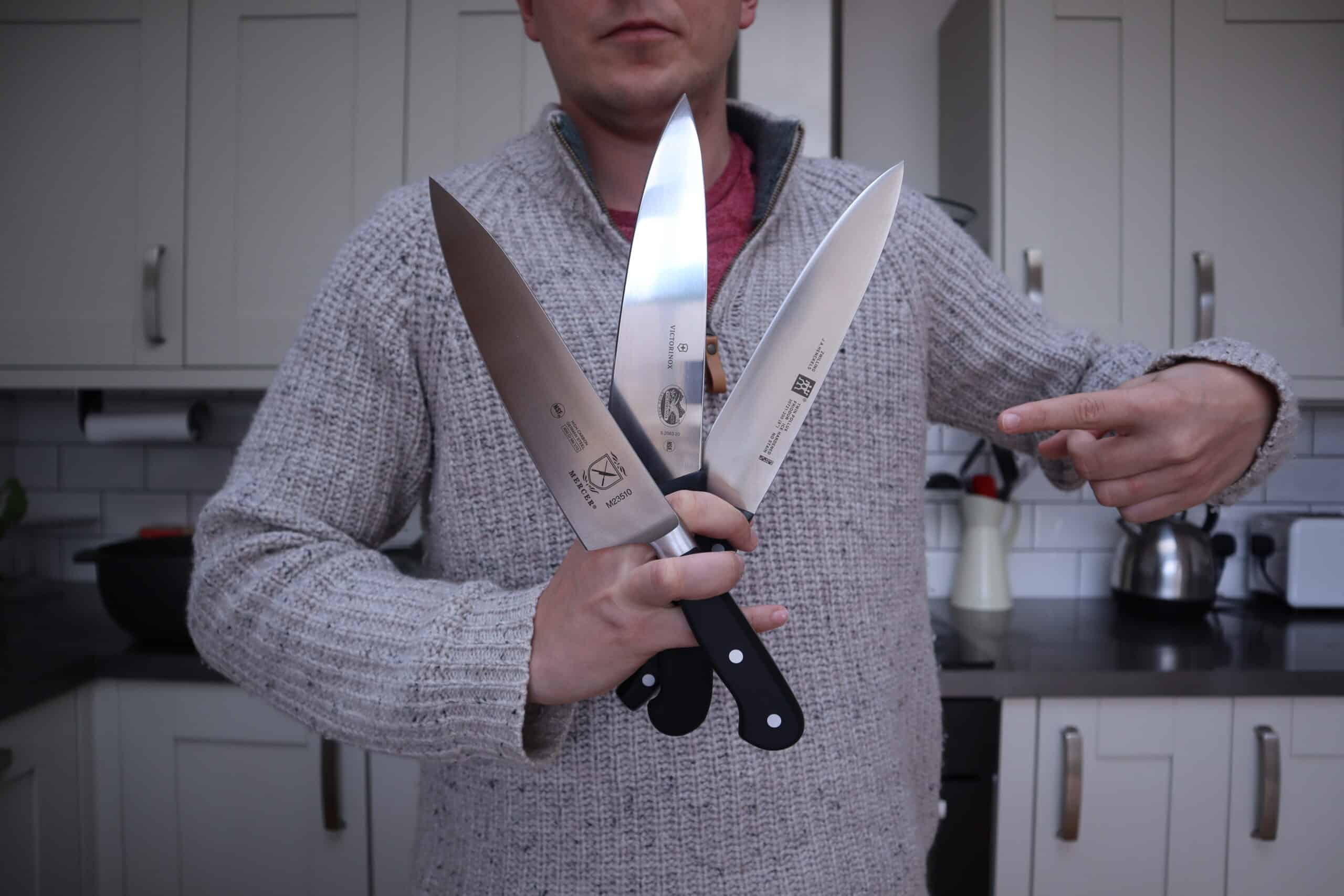